I wish I had Twains Brain

Posted by Karthikeyan A K on September 22, 2013 in Uncategorized

Freedom of expression should prevail

I am quiet dismayed by the fact  that Linux Kernel Mailing List is now intruded by big brother companies and they want it to be kind of moderated. The author here http://www.internetnews.com/blog/skerner/is-it-time-to-restore-civility-to-linux-development.html says he supports it. THE HELL.

First companies like Intel and Nvidia must understand ‘The Hacker Culture’. A hacker is a free person (who thinks he is THE GOD), change his feelings and he might not be as creative as he would be. Yes in mailing lists of open-source software around the world, there are abusive words, hard for newbies to take it in, that’s how it was, and that’s how it will be, and that’s how creative minds works. No secrets, just blunt honesty. If a company or person cannot tolerate it, may it be out of it. None begged them to develop Linux Kernel.

If Intel thinks it has truly got smart people than those who develop the Linux, it must put out its own OS! Thereby proving people who are introverts can build a better OS. Simple.

Hello Intel, if you want a brahmin sugar coated talk, tell your employees to goto a Marketing guys mailing list dominated by MBA’s.

Posted by Karthikeyan A K on July 16, 2013 in Electronic Freedom, Free Software, Technology

Posted by Karthikeyan A K on July 4, 2013 in Uncategorized

Posted by Karthikeyan A K on June 12, 2013 in Uncategorized

Thankfully not all humans are stupid

Believe it or not, this kind of world is achievable. Just minus greed from humanity!

Posted by Karthikeyan A K on May 20, 2013 in Uncategorized

Why Patents / Copyrights must be abolished

Posted by Karthikeyan A K on March 21, 2013 in Uncategorized 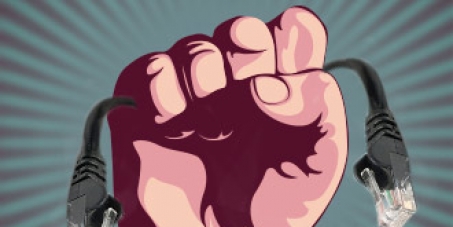 India projects itself as a free country, a country where liberty exists, but the truth is Indian internet is heavily filtered. A recent one that I found out is a web site called Bay Image http://bayimg.com has been blocked. One thing I am not able to understand why it has been blocked?

Bay Image is not a evil website, all it does is let users post images in it. That’s it! I don’t know why this one irks The Indian Government. All Bay Image does is protect the privacy of the uploader.Unlike many websites that track your I.P , force you to login, Bay Image does not do that. Being a part of the Pirate constellation of websites, led by The Pirate Bay http://thepiratebay.se , Bay Image just protects your privacy. in other words Indian Government or any one won’t know who uploaded a image.

I wonder why this terrifies the government so much? I also wonder weather there are a set of embarrassing images about Indian politicians in Bay Image which could start a revolution in this country, thus overthrowing corrupt people and businesses? If India says its a free nation and if the politicians truly swear by it, then why can’t India be a free country?

Yes there will be stuff put up by the terrorist and miscreants. Some one could put images that might trigger Hindu – Muslim violence, but shouldn’t a democratic country be democratic and trusting its people rather than fearing a website that gives true user freedom?

I strongly believe, every Indian should have uncensored access to the internet. If the government believes that an Indian truly has the right to vote his ruler then why they mistrust him / her and deny access to free Internet? If you think the choice of viewing web should be under your control and not be censored by the government, please sign this petition https://secure.avaaz.org/en/petition/Unblock_Bayimg_in_India/

Lets create a truly free India for our and future generations to come.

Its quiet crazy what’s happening in my state. A bunch of radical Islamist have managed to ban a movie called Vishwaroopam here. This film was made by a very good actor / director Kamalakasan who is quiet arguably the greatest actor Tamilnadu / India has ever produced. Most of the movies he made are world class.

When the entire Tamiian society was awaiting this thriller, then just six to seven Islamic radicals (some of them appear in Win TV) managed to block the movie by using some loop holes in law. The fact is there is nothing wrong shown about muslims in the movie. In fact our neighbouring state Kerala where there is significant muslim population has no problem in running this picture.

This ban also shows very sad state of Tamilnadu and how vote bank politics is ruining it. Just because some people influential in Islamic community and who could persuade thousands of muslims to cast vote the party they wish went and spoke to government, and the movie was banned!! Is this democracy. This is pure Talibanization.

One must realize that muslim in India are not Talibans. If you are muslim in India, please be aware that you are much more cultured and and much more aware than the one in Pakistan. Talibans and their ideas should stop at the Pakistani border and must not corrupt Indian muslims. In fact muslims in Pakistan who are fed up with Talibanization of their country must move to India.

For example take for Afghanistan. Women were more free in Afghan during the Soviet era, when the Talibans captured it, you know. Take a look at the picture below

You could see Jinnas wife wearing a saree, now why has the saree wearing culture gone in Pakistan? What happened to unique Indian muslim culture that Pakistan should preserve? Did any one think of it? Why on Earth Pakistan is banning Facebook, Youtube and other stuff time to time. if God is so great why don’t they trust their citizens who are Gods children?

Who are these people who claim that they have right to change unique muslim cultures that’s present in almost every part of the world? Muslims must think. Think hard they must.

Posted by Karthikeyan A K on January 29, 2013 in Politics, Tamil